0-3 and a Barbecue? Has the Steelers' Season Already Gone Down in Flames?

Like the rest of Steelers Nation, Schneider Downs was very disappointed when the Steelers could not march down the field on the last possession to win the game against the 49ers. Losing that game puts the Steelers in a rough spot, especially considering the key injuries they have suffered only three weeks in to the season. Looking around the NFL, there are four other teams that started the 2019 season with an 0-3 record. Fortunately for the Steelers, one of those teams, Cincinnati, is in their division. Looking back over the Steelers’ history since the NFL and AFL merger in 1966, there were five other times the team started the season with a 0-3 record. The best record a team finished with was 9-7 in 2000 and the worst record was 2-11-1 in 1968.

Looking at the data for all teams that started 0-3 since 1966, the best team record was 11-5, which occurred two separate times. The worst record was 0-16 by both the Cleveland Browns in 2017 and the Detroit Lions in 2008 but most importantly, the Cleveland Browns. Looking at the win total for each season from 1966 to 2018, the Steelers have been less consistent than one would think as shown in the graph below, but they have more recently finished at least around .500.

The graph below shows the number of times a team has made the playoffs after starting 0-3, and unfortunately, it doesn’t look like the odds are stacked in the Steelers’ favor. The best a team ever did was lose in the Divisional round of the playoffs, but after Sunday’s game against the 49ners, I’ll bet most Pittsburgh fans would call that a successful season. 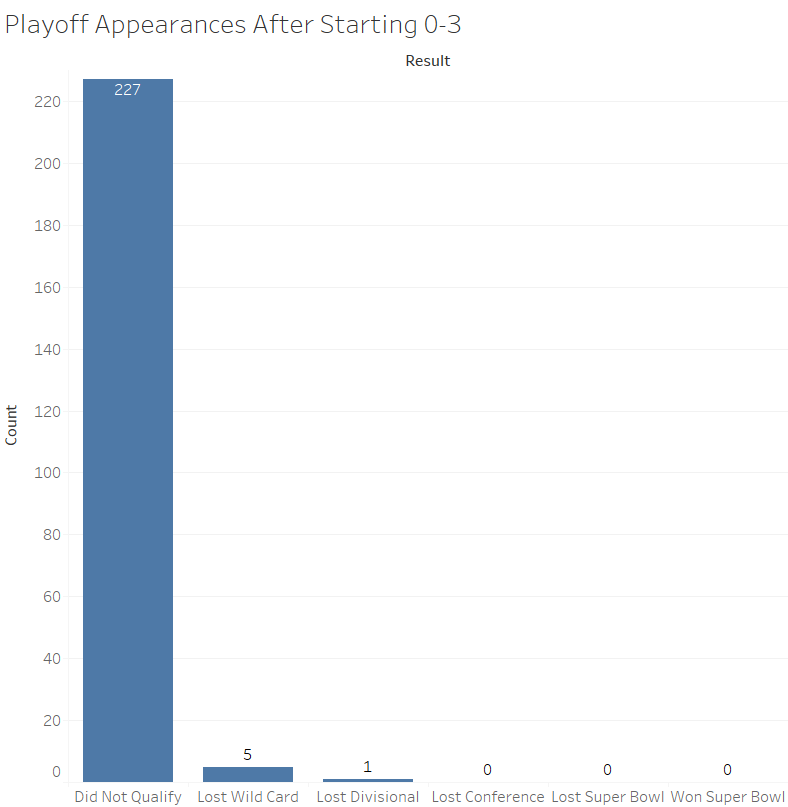 The majority of teams who start the season with an 0-3 record do not even finish the season above .500 as seen in the chart below. This may paint a bleak picture for the rest of the Steelers’ season but someone always has to be the exception to the rule, right? Just do yourself a favor and don’t look into the stats of teams that start 0-4.

© 2022 Schneider Downs. All rights-reserved. All content on this site is property of Schneider Downs unless otherwise noted and should not be used without written permission.

Learn how companies can identify supply chain vulnerabilities and be better prepared for future risks. ...

Learn how companies can identify supply chain vulnerabilities and be better prepared for future risks. ...