Most accounting professionals are familiar with the story of Enron – the former worldwide energy company that went bankrupt as a result of accounting fraud. The case is the gift that keeps on giving – because the situation can be used for case studies across many topics of the accounting profession. One of the most intriguing items that was made publicly available as a result of the investigation was a database of email messages that were exchanged by various members of the company during the time that the fraud was occurring.

Although email monitoring tools were not as prevalent during the time, an analysis of conversations among the executives could have tipped off an observer that something was going awry within the company, either through sentiment analysis, phrase extraction, or even simple “key word” monitoring. Sentiment analysis is a great tool to determine meaning from mass amounts of “unstructured” data such as emails, and is further described in the following paragraphs.

Sentiment analysis is the act of categorizing attitudes and emotions expressed in a piece of text. Usually, the sentiment is evaluated as either positive, negative, or neutral, but sentiment can also be evaluated on a numerical scale. For this example, I used a rule-based sentiment analysis method known as VADER (oddly relevant for this case study) to find sentiment trends in the email messages.

The population of emails in my study was limited to messages sent to show the sentiment of the Enron employees and scored on a scale of -1 to 1, with -1 being negative sentiment and 1 being positive. For this analysis, the emails were scored and the average sentiment by month was determined, resulting in the following graph. The median monthly closing price of Enron stock was also included for reference.

Upon first inspection of the sentiment graph, there are some distinct trends present in the sentiment – a sharp increase in positive sentiment, followed by a drop at the beginning of 1999, followed by a gradual increase until the end August of 2001. These trends are interesting when viewed in the context of the stock price of the company at each of these points in time.

At the beginning of 1999, the company was riding high from record earnings in the year before; it would be expected that sentiment would be positive at this time as employees relished in the accomplishments. The company showed continued success through September 2000, with the stock price increasing through this date in line with the general increase in positive sentiment through that point. However, from that point on, the stock price began to fall as the company’s earnings began to falter, but a similar decrease is not seen within the email sentiment. This is explainable when taken into context with who is sending these emails – Enron executives. During this period, they were encouraging employees to buy stock in the company – which would make use of more “positive” language to instill confidence. By August 2001, however, the cat was out of the bag – analysts were downgrading the stock and the sentiment decreased as the employees lost faith in the company.

Overall, this exercise has shown how sentiment analysis can be an extremely useful tool in evaluating the content of unstructured data, either in the context of e-discovery or fraud analysis. Using these methods, an analyst can notice otherwise undeterminable trends across large sets of data, a task that would otherwise be impossible or time-prohibitive.

If you have any questions regarding potential fraud schemes, internal controls, or the use of data analytics to detect fraud at your professional services organization, please contact Andrew Trettel, CPA, CFE, CVA at 412-697-5436 or Brian Webster, CPA/ABV/CFF, CVA, CFE, CMA at 412-697-5307 of the Business Advisory Group at Schneider Downs. 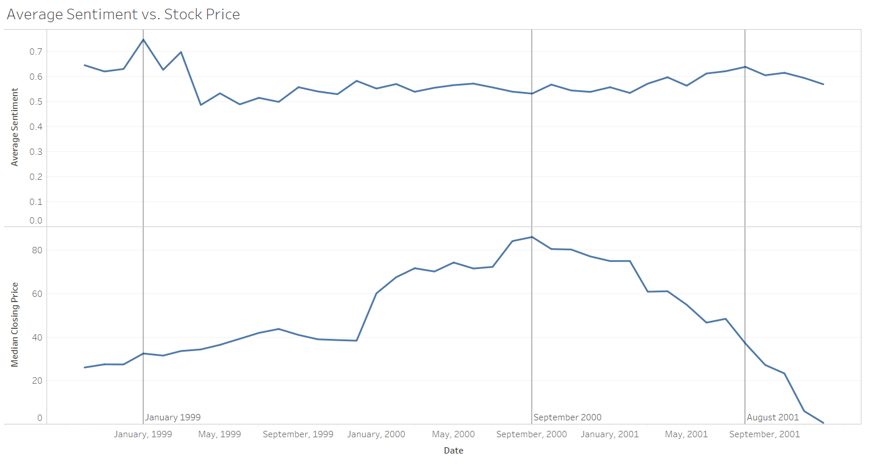 © 2021 Schneider Downs. All rights-reserved. All content on this site is property of Schneider Downs unless otherwise noted and should not be used without written permission.