Analyzing the Growth of Soccer in America

With Major League Soccer playoffs in full swing, the growth of the sport in America is exploding!  Countless articles released over the past several years testify to soccer’s rapid growth in the United States. Most notably, Forbes stated in a 2019 article that “there’s no doubting that that popularity of soccer, both in participation and interest, is increasing in the United States.”

As not only a soccer fan but also as a fan of data analytics, I had to find out for myself if the numbers were there to back it up. Using Major League Soccer attendance data dating back to the league’s inception in 1996 as well as U.S. high school sports participation statistics dating back to 2003, I set out to complete my self-assigned task.

There is no doubt that Major League Soccer (MLS) as a professional sports league is growing. The league began play in 1996 with 10 total teams and operated in the 2019 season with 24 teams. Additionally, there are plans for continued expansion to 30 teams in the coming years, with expansion into Nashville, Miami, and Austin confirmed in the next two years. But has the fandom grown with the league?  The quick answer: yes.

During its inaugural 1996 season, MLS averaged a total of 17,406 fans per game. Since most new things, such as retail stores and restaurants, experience a popularity bump with “grand openings,” I decided to consider the 1996 season to be MLS’ grand opening. According to the Small Business Chronicles, grand openings help attract new customers, generate buzz, gain media attention and create goodwill.

However, much of this growth can be attributed to expansion teams such as the Seattle Sounders and Atlanta United, which began play in 2009 and 2017, respectively. Seattle and Atlanta have consistently topped attendance statistics since their entrances into the league, with Seattle averaging 40,719 fans per game and Atlanta averaging 51,237 fans per game.

Therefore, I isolated the nine franchises still remaining in the league that participated in the 1997 season: Colorado, Columbus, DC United, FC Dallas, LA Galaxy, NE Revolution, New York Red Bulls, San Jose, and Kansas City. During the 1997 season, these franchises averaged 14,969 fans per game, whereas in the 2019 season, they averaged a total of 17,370 fans per game, an increase of 16% total and 1.60% per year. Therefore, it is fair to say that popularity has grown amongst the league and should only continue with the league’s planned expansion. 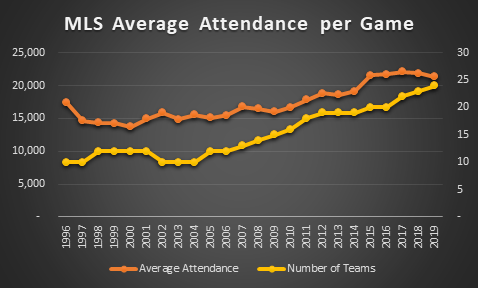 Typically, in business, one of the largest expenses on a company’s income statement is payroll. This is especially true of a professional sports league, where the quality of play can produce a lasting impact on the league’s overall popularity. Using data obtained from the MLS Players Union dating back to 2007, I was able to compare league attendance against the average player salary.

League salaries have jumped astronomically since 2007, with the league minimum salary in 2007 being just $12,900, compared to the league minimum salary of $56,250 in 2019, a 336% increase!  The median player salary has also grown at a substantial rate of 248%, increasing from $50,400 in 2007 to $175,285 in 2019. So while the quality of the average MLS player has increased substantially from 2007 to 2019 based on salary statistics, attendance bumps have not quite matched what franchises would have hoped for when making investments in the teams.

However, with investments made in big name players such as Zlatan Ibrahimovic, Wayne Rooney, and Carlos Vela, the league could see attendance bumps from fans wanting to see these world class stars in action. 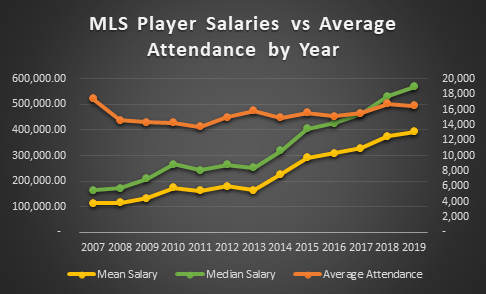 For more information on Schneider Downs’ data analytic service capabilities, contact us at [email protected] or visit us at www.schneiderdowns.com/data-analytics.

© 2023 Schneider Downs. All rights-reserved. All content on this site is property of Schneider Downs unless otherwise noted and should not be used without written permission.

Learn more about how SaaS companies can determine the proper accounting for the costs incurred in software development. ...

Learn more about Section 604. Optional Treatment of Employer Matching or Non-elective Contributions as Roth Contributions of the SECURE 2.0 Act. ...