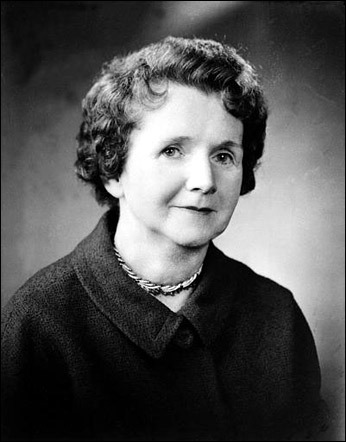 In honor of Earth Day today, Thursday, April 22nd, I want to highlight environmental advocate, Rachel Carson.  She was a woman influenced by her mother’s love of nature as a child.  Little did she know her poetic gift of writing and passion for the environment would spark a movement.

Rachel Carson was born on a farm in Springdale, Pennsylvania on May 27, 1907 just outside Pittsburgh on May 27, 1907. She was the youngest of three children.  At a young age, Rachel’s mother taught her the calls of animals and the names of plants.  Her love of nature was captured in her words as she began to write stories of the animals and birds that lived around the farm. In her heart, Rachel knew she would be a writer.    She became a published author at 10 years old for several children’s magazines and writing living a lifelong passion with a purpose.

In 1932, Rachel moved her sick father, mother, divorced sister and nieces to Baltimore where she earned a master’s degree in Zoology and began studying for her doctorate at John Hopkins University. Since her father was ill, she had to abandon the doctorate program to support her family and became the second female to be hired at the US Bureau of Fisheries.

After a short time in her position, she wrote an 11-page essay about sea life that her department head commented was “too good” for a government brochure. He encouraged Rachel to send to the essay to a publication, The Atlantic, where it was published and the renamed “Undersea” was published.  Not long thereafter, she began reading government reports about fish and wildlife and the effects of DDT, a chemical pesticide that stopped the spread of typhus by killing lice.  This chemical had not been tested for civilian use and many creatures other than insects appeared to be dying.  Rachel was intrigued, so she wrote an article on the imbalance of nature caused by the chemical and pitched it to Reader’s Digest.  Reader’s Digest decided not to publish her article so she decided to focus on writing books.

Rachel wrote her first book about sea life, “Under the Sea-Wind” in 1941.  Regardless of health issues (doctor found and removed lumps in her breast), Rachel continued writing and published “The Sea Around Us” was published in 1951. This book earned her a National Book Award, a national science writing prize and was on the Times best seller list for 86 weeks.  She also won a Guggenheim Grant, which along with the earnings from her books, provided her with the means to move to Southport Island, Maine, where she built a cottage by the ocean.  In 1955 Rachel wrote “The Edge of the Sea”.

A couple of years later, Rachel faced another family tragedy when one of her nieces died of pneumonia and left her with her four-year-old son, Roger, whom she adopted. At that time, she decided to set aside from taking on long writing projects.

In January 1958, Rachel received a letter from Olga Owens Huckins, a member of the citizen’s Committee Against Mass Poisoning. Ms. Huckins wrote about the devastating effects of statewide insecticide aerial-spraying programs in the Northeast. She also wrote that the insects were not dying but everything else was.  but the insects were dying. There was a trial against the chemical company and she suggested that Rachel cover the story in New York.  Since Rachel was needed to care for her mother and nephew Roger, she convinced The New Yorker to publish the story. Rachel received reports at home regarding the trial, wrote the article and it was published.

In the fall of 1958, her mother had a stroke and passed away in December.  Her mother’s love of nature-inspired her last and most famous book “Silent Spring” published in 1962.  “Over increasingly large areas of the United States, spring now comes unheralded by the return of the birds, and the early mornings are strangely silent where once they were filled with the beauty of the bird song,” Carson wrote.  The topic of “Silent Spring” focuses on the devastating effects of pesticides, namely DDT, on ecosystems and people.  Rachel accused the chemical industry of misinformation and they in turn, discredited her as a “hysterical woman” or Communist while being interviewed on CBS TV special that aired in April 1963.  Over 15 million people watched the special broadcast and the topic became a major, political issue.

Rachel’s appearance on CBS and book “Silent Spring” about the destruction of pesticides was validated by President Kennedy’s Science Advisory Committee Report.  Rachel received medals from the National Audubon Society and the American Geographical Society and was inducted into the American Academy of Arts and Letters.

After a long battle with breast cancer, she died in 1964. Since her death, a variety of groups have celebrated her life and work and in 1980 Rachel was posthumously awarded the Presidential Medal of Freedom by President Jimmy Carter.

Rachel Carson’s persistence and passion in her beliefs over her lifetime is an illustration of how we can all make a difference in our own lives, communities, and the greater world.   Change often occurs slower than we like but investing time, effort and enthusiasm allows us all to make the world a better place.

© 2022 Schneider Downs. All rights-reserved. All content on this site is property of Schneider Downs unless otherwise noted and should not be used without written permission.